Anaemia is a disease that occurs when the number of red blood cells (RBCs) and/or the amount of haemoglobin found in the red blood cells falls below normal. This means you lack sufficient healthy red blood cells to carry adequate oxygen to your body’s tissues. This makes you feel tired and weak.

RBCs and the haemoglobin contained within them are necessary for moving oxygen from the lungs to the rest of the body. Without an adequate supply of oxygen, many parts of the body will not work properly.

Anaemia can be mild, moderate or severe depending on how much the RBC count and/or haemoglobin levels have fallen. It is a fairly common condition and affects both men and women of all ages and ethnic groups.

Certain people are at an increased risk of developing anaemia. These include people with diets poor in iron and some vitamins, long lasting illnesses such as kidney disease, diabetes, cancer, inflammatory bowel disease, a family history of inherited anaemia, longstanding infections such as tuberculosis or HIV and those who have had significant blood loss from injury or surgery.

There are several types of anaemia including:

Signs and symptoms of an anaemia

Though different types of anaemia have different causes, the signs and symptoms can be very similar. Mild or moderate forms of anaemia may cause few if any symptoms. The most common symptoms are:

What tests are included in the anaemia test?

1. Full Blood Count (also known as a Complete Blood Count). This is a comprehensive blood test that screens components of your blood including:

We talk about the Full Blood Count in detail, here.

2. Red cell folate (B9) and Vitamin B12. Folate works closely with vitamin B12 to help make red blood cells and help iron work properly in the body.

3. Ferritin. Ferritin is a protein that stores iron. Ferritin is stored in the body’s cells until it’s time to make more red blood cells. The body will signal the cells to release ferritin. The ferritin then binds to another substance called transferrin to transport it to where new red blood cells are made. If a person doesn’t have enough ferritin, iron stores can deplete quickly.

4. Erythrocyte Sedimentation Rate (ESR). ESR actually measures the rate of fall (sedimentation) of erythrocytes (red blood cells) in a tall, thin tube of blood. Results are reported as how many millimetres of clear plasma are present at the top of the column after one hour.

Anaemia increase the ESR fall rate by changing the consistency of RBCs.

Your body relies on iron in red blood cells to carry oxygen to all its cells. Without enough iron, your red blood cells will be unable to supply enough oxygen. However, too much iron isn’t good for your body either (it can lead to organ damage). Both high and low iron levels may indicate a serious underlying problem.

Order an Anaemia Test Kit. Our Anaemia home blood test kit checks your blood’s ability to transport oxygen and measures your iron levels and essential B vitamins. If you have anaemia you lack sufficient healthy red blood cells to carry adequate oxygen to your body’s tissues. This makes you feel tired and weak.

This Anaemia Test is advised if you:

Generally, anaemia is easy to treat through supplementation and/or diet changes. However, anaemia treatment can depend on the cause. Speak with your doctor to discuss your treatment options. Other treatments may include:

SYMPTOMS: a general feeling of tiredness, lack of energy or weakness, breathlessness, pale complexion, dizziness, feeling of cold or numbness in hands and/or feet, pale complexion, fast or irregular heartbeat and chest pain, hearing a pounding sound (your pulse) in your ears 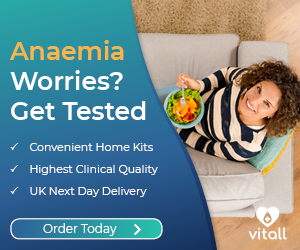